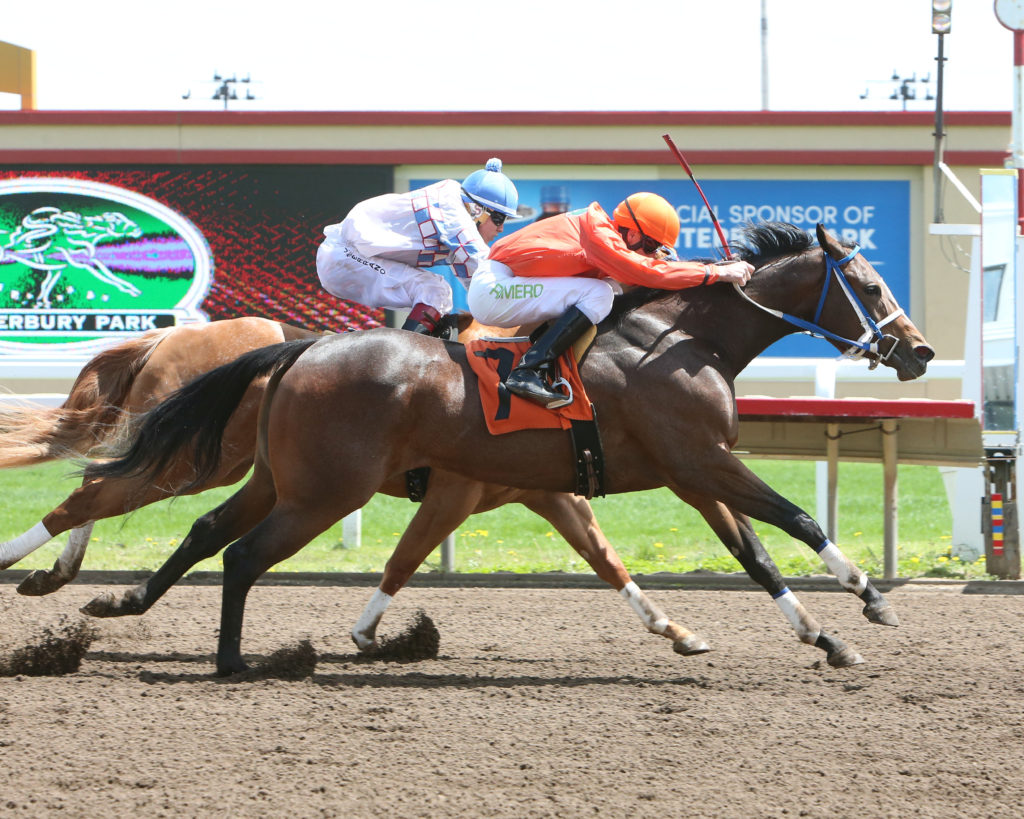 SHAKOPEE, MN – MAY 25, 2019 – Opening day of the 2019 Canterbury Park Quarter Horse meet started with good weather and trials for the $57,325 Gopher State Derby on Saturday afternoon.

No longer a restricted race, the number of trials for the Gopher State Derby increased to four for the 2019 edition. The 400-yard final will be held on June 8.

The third trial produced the two fastest qualifiers, including the winner, Veuve Clicquot, with a time of 19.870 and a 94 speed index. Josh Romero had the call for Clinton Crawford and Cavanaugh Quarter Horses LLC.

Veuve Clicquot ($10.20) was bred in Oklahoma by Canadian River QH LLC, out of Belle of Valor, by Valiant Hero. The 3-year-old daughter of Pyc Paint Your Wagon was still a maiden before Saturday’s trial win, though she had hit the board in four of her six previous starts.

It was the first start at Canterbury for Veuve Clicquot, but runner up The Bald Eagle had made two starts in Shakopee as a 2-year-old before qualifying to the $251,000 Valley Junction Futurity at Prairie Meadows last fall.

Finishing just a neck behind the winner, The Bald Eagle and Julian Serrano were the second fastest overall qualifiers in 19.915. The Bald Eagle is trained by Jason Olmstead for Tom and Bill Maher and Movin On. He was bred in Louisiana by Grant Farms LLC, by One Famous Eagle and out of the Corona Cartel mare Corona Deluxe.

The same connections also own and train The Bald Eagle’s full brother, Eagle Deluxe, who won the $52,500 NCQHRA Futurity in 2017 and qualified for the Heritage Place Derby (G3), Canterbury Park Derby, and Valley Junction Futurity.

The winner of fourth and final trial, One Famous Ocean, posted the third fastest overall time of 19.941. One Famous Ocean ($9.60) and jockey Ry Eikleberry won by daylight for trainer Jason Olmstead. She was bred in Texas by Muller Racing, LLC, out of A Tempting Ocean, by Ocean Runaway.

The ownership group of the One Famous Eagle filly comprises noted Canterbury owners Tom and Bill Maher and Paul Luedemann as well as Alex Stalock, a goalie for the Minnesota Wild, and Canterbury Park track announcer and voice of the Minnesota Vikings Paul Allen, giving local sports fans a reason to cheer on the opening day of Quarter Horse racing at Canterbury Park.

Posted in All News, News, Other News, Racing News and tagged news
Powered By Ultimate Auction