After three second-place finishes during Canterbury Park’s 2017 meet, Pyc Jess Bite Mydust ($2.80) finally found his way back into the winner’s circle for the $45,000 Minnesota Quarter Horse Derby on Sunday.

“We’ve had so many second-place finishes, I had to hold my breath when I saw there was another photo finish. It means a lot to us to see him win here again”, said Judy Lunderborg, who owns and bred the horse with her husband, Bruce, under their ownership group Lunderborg LLC. “He’s the first horse we ever bred, and his full brother [Dickey Bob] runs in the next race”, she continued, referring to their morning-line favorite entry in the Minnesota Quarter Horse Futurity. 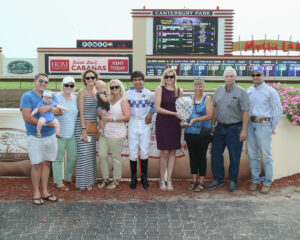 Pyc Jess Bite Mydust, a Minnesota-bred, won the $165,000 Mystic Lake Northlands Futurity in 2016 as the only locally-bred horse in the largest futurity of the meet. His second-place finishes in 2017 include his trial and the final for the $81,000 Canterbury Park Derby. The gelding was honored as Canterbury Park Quarter Horse of the Meet in 2016 and now has career earnings of $154,786. Pyc Jess Bite Mydust is by Apollitical Jess, out of the Pyc Paint Your Wagon mare Paint Or More.

Pyc Jess Bite Mydust is trained by the leading trainer of the Canterbury meet, Jason Olmstead, and was ridden by Brayan Velazquez. Final time for the 400-yard event was 20.062 and the winning pair earned a 97 speed index. 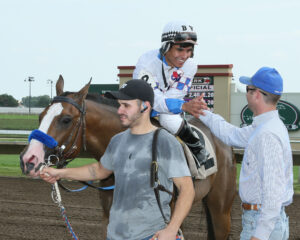 Bred in Minnesota, Pollitical Eye Apeal is by Apollitical Jess and is out of the Mr Eye Opener Miss Eyewear.

In third place was last year’s Minnesota Quarter Horse Futurity champion, Vodka At Moonlight, with Denny Velazquez aboard. The daughter of Triple Vodka is owned and bred by Summer Run, Inc, out of the Oak Tree Special mare Moonlight Masquerade. Vodka At Moonlight won the $29,000 Bob Morehouse stakes at Canterbury earlier this summer.