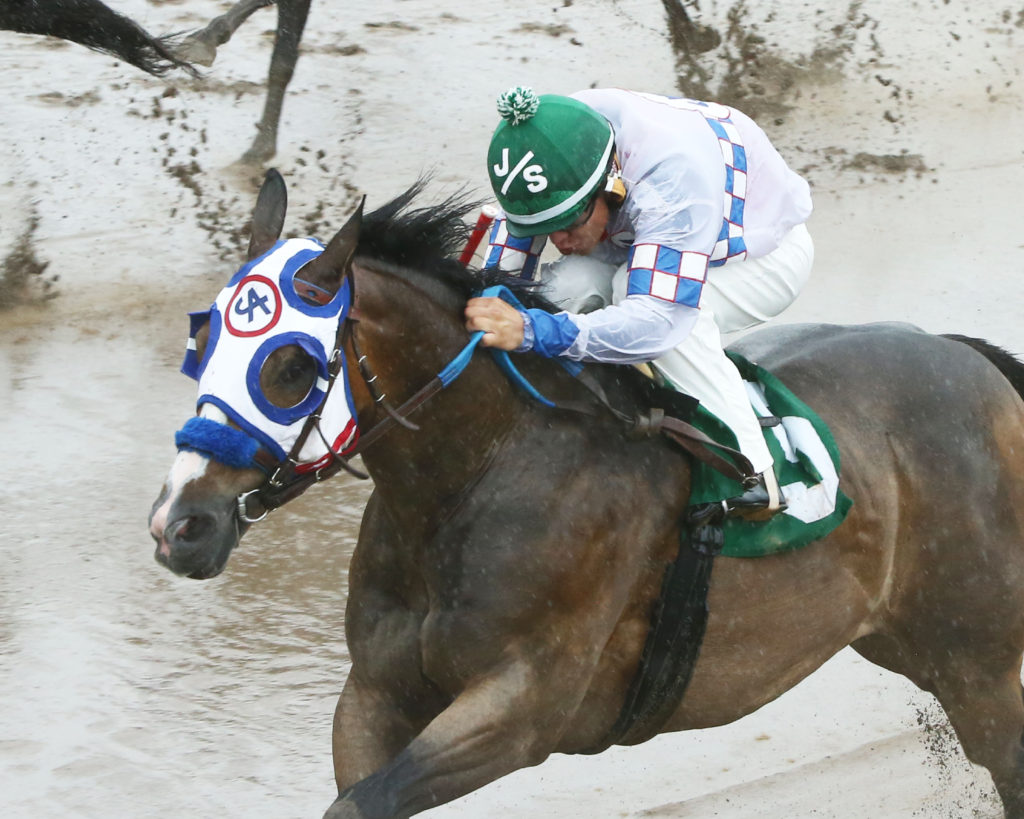 SHAKOPEE, MN – MAY 27, 2019 – In the opening race on a rainy Memorial Day at Canterbury Park, Dickey Bob splashed home first in the $25,000 North Star State Stakes.

To win the race, 4-year-old Dickey Bob had to pass his own full brother and defending champion of the North Star State Stakes, Pyc Jess Bite Mydust. The two geldings drew next to each other and raced side by side in their third lifetime matchup.

Dickey Bob and Pyc Jess Bite Mydust are both out of the Pyc Paint Your Wagon mare Paint or More and sired by Apollitical Jess. They are trained by Jason Olmstead and are Minnesota homebreds for Bruce and Judy Lunderborg.

Pyc Jess Bite Mydust was the narrow post-time favorite in the race despite having been bested by his brother in their previous two meetings.

The Lunderborgs were unsure which of their geldings would prevail in the race given the relentless rain, knowing that Dickey Bob has an aversion to standing water. The pouring rain created a track so muddy that a family of ducks was spotted swimming on the main track prior to the race. Dickey Bob had only one previous start on a wet track, two years ago, when he finished second in his trial for the Northlands Futurity.

Pyc Jess Bite Mydust has earned $196,821 in his five career wins, which include the $165,600 Mystic Lake Northlands Futurity.

Pyc Jess Bite Mydust, now five years old, broke last in the field of six with Ry Eikleberry aboard and finished a length behind Dickey Bob and a length ahead of third place finisher Curious James and Nik Goodwin.

Curious James is a triple play for Mark Wilson, who bred, owns and trains the 5-year-old gelding. He is by Ivory James, out of Takin on the Crunch, by Takin on the Cash.

Curious James has four wins in 17 career starts, multiple stakes placed, and has earned over $34,515.