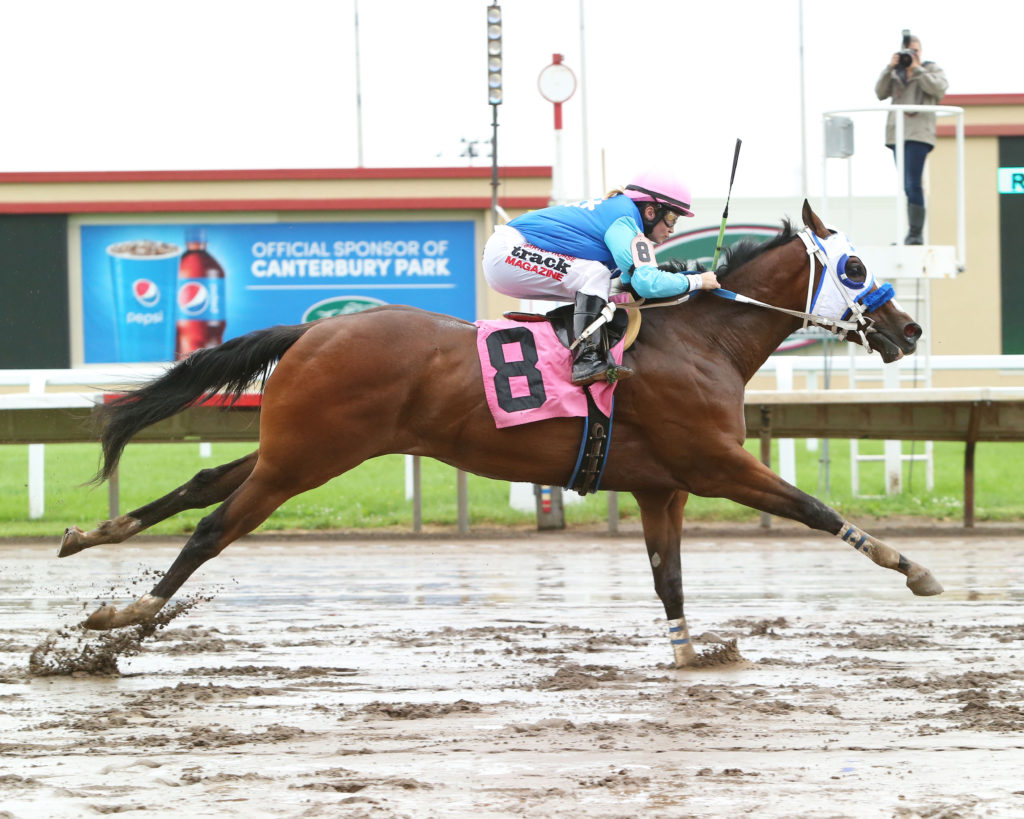 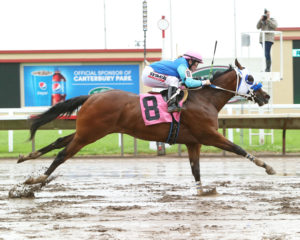 Morning thunderstorms in Shakopee gave way to overcast and dry skies in the nick of time for the Mystic Lake Northlands Futurity trials at Canterbury Park on Saturday afternoon. The sloppy, sealed track produced the fastest time in the second of five trials as Mildred Didrickson and Nakia Ramirez covered the 350-yard trial in 17.782 and earned a 99 speed index.

The $146,400 Mystic Lake Northlands Futurity final will be held on Sunday, July 8 at Canterbury Park, one of four Quarter Horse Stakes that day with total purses worth over $250,000. The MQHRA also invites all members and connections of the Mystic Lake Northlands Futurity to the annual MQHRA Quarter Horse Celebration on Saturday, July 7, at Canterbury Park. Contact info@mqhra.com to RSVP or learn more.

A full list of qualifiers, times and connections can be found here. At least one horse qualified from each trial, and the inside, outside and middle posts were all well represented.

Mildred Didrickson ($7.40) was the third choice of the betting public in her trial, despite having raced three times at Remington Park. She broke her maiden by a length in her third lifetime start and earned a 93 speed index. The Desirio filly is trained by Jason Pascoe and is owned by Milena Kwiecien.

Mildred Didrickson was bred in Oklahoma by Nancy Yearsly and J. Garvin Kelly; she is out of the Country Quick Dash mare Valdarama.

The second and third fastest qualifier finished a short nose apart in the third trial. Maghelene, on the far outside, rallied to win over Miss Energy P, who led the entire race from the rail. The two front-runners put a length and a half between them and the rest of the field.

Maghelene ($8.00) was ridden by Cristian Esqueda and is trained by Jason Olmstead for owner Tom Scheckel. The daughter of One Famous Eagle was bred in Oklahoma by Jj Cool L LLC. Final time for the third trial was 17.794.

Miss Energy P was a nose away from the winner’s circle but was fast enough to finish as the third fastest qualifier overall of the day with a time of 17.801.

The Pyc Paint Your Wagon filly is owned by Michael Pohl and is trained by Stacy Charette-Hill. Jorge Torres was aboard, who also rode the filly in her maiden-breaking debut at Remington Park.

The fourth fastest qualifier, Shes Sizzling ($3.60), came out of the fifth and final trial. The Sizzling Cartel filly went off as the heavy favorite and posted a final time of 17.895. Nakia Ramirez was aboard for trainer Jason Pascoe and owners/breeders Joyce and Erik Lehtinen. She was bred in Ontario out of the Eyesa Special mare Shenandoah Special.