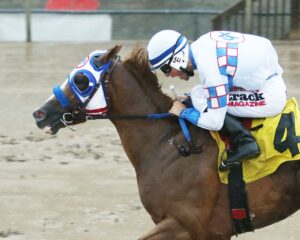 The track was muddy and the race was delayed, but that did not stop First of 15 from powering home in a dominating win at on Saturday afternoon in the $34,150 Gopher State Derby at Canterbury Park.

First of 15 ($6.20) and jockey Cristian Esqueda defeated runner-up and fastest qualifier Painted Dynasty by two and a half lengths. The final time of the race, 19.751 for 400 yards, was the fastest running of the Gopher State Derby in the 16-year history of the race.

This was the second Gopher State Derby win for trainer Jason Olmstead, but the first for owner Richard Tobin. First of 15 was bred in Oklahoma by James and Marilyn Helzer, out of the Corona Cartel mare Tinys Corona Queen.

The Apollitical Jess filly broke her maiden in her 2-year-old debut at Remington Park. She spent last summer at Canterbury, where she qualified for the $165,600 Mystic Lake Northlands Futurity and finished third in the $52,600 NCQHRA Futurity. 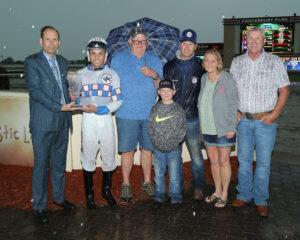 Fastest qualifier Painted Dynasty could never get in front of First of 15 but maintained a steady lead over the rest of the field to defeat third-place finisher Marfilmio by a half-length.

Painted Dynasty won the second of three trials for the Gopher State Derby on May 26 and has finished no worse than second in her three starts as a 3-year-old at both Canterbury and Remington.

Trainer Jason Olmstead completed the exacta with Painted Dynasty’s second place finish in the Gopher State. The FDD Dynasty filly was ridden by current leading rider Ry Eikleberry. She is owned by Tom Scheckel and was bred in Oklahoma by Michael Teel, out of the Pyc Paint Your Wagon mare Tygers Painted Girl.

Third-fastest qualifier Marfilmio, with Ismael Suarez Ricardo aboard, completed the trifecta. Marfilmio is a 3-year-old son of Ivory James and is trained by Vic Hanson. Marfilmio competed in allowance races at Remington before returning to Canterbury and winning his trial. 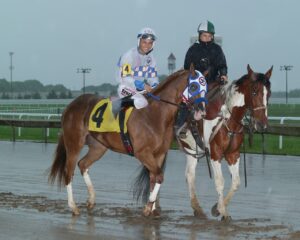 Marfilimo was bred in Texas by Bobby Cox, out of the Mr Jess Perry mare Sinuous. He is owned by David and Debra Harsche.

Posted in All News
Powered by Ultimate Auction Pro