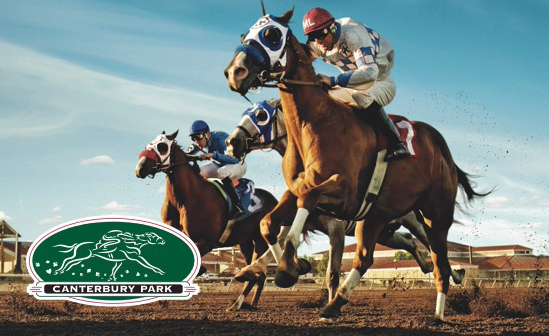 All quarter horse program includes Grade 3 BOA Canterbury Park Championship Challenge
For Immediate Release:
Monday, July 6, 2020
Contact:        Jeff Maday
Media Relations Manager
(952) 496-6408
jmaday@canterburypark.com
Shakopee, Minn.  —  Canterbury Park’s Tuesday racing program won’t take long or at least the races themselves won’t, as the 10-race program features quarter horse racing exclusively with distances ranging from 250 yards, usually clocking in at just over 13 seconds, to 870 yards. Track officials refer to this as The Fastest Day In Minnesota Sports. This year’s event includes six stakes races headlined by the $62,739 Bank of America Canterbury Park Championship Challenge, which was designated a Grade 3 race by the AQHA Graded Stakes Committee. Racing, conducted weekly Monday through Thursday, begins at 4:30 p.m.
Defending champion Pyc Jess Bite Mydust is one of 11 entered in the 440-yard BOA Championship Challenge. Trained by five-time leading trainer Jason Olmstead,  the 6-year-old Minnesota-bred is often his own worst enemy, breaking poorly from the gate and leaving too much ground to make up at shorter distances. He hopped at the start in this race last year but persisted to get up at the wire, winning by a head. Olmstead would have considered scratching had the gelding not drawn an inside or outside post. Pyc Jess Bite Mydust drew post one.
“There are a lot of tough ones in here this year,” Olmstead said. “More than last year. Danjer is fast and Casey Black has a good one.”
Danjer, the 5 to 2 morning line favorite trained by Dean Frey, has earned $534,473, more than any other in the field and has won three of seven at the 440 yard distance. Frey also entered Kowboy Jim, winner of this race in 2018. Eagles Fly Higher is trained by Black. The 4-year-old colt won a grade 2 and grade 1 race at Remington Park this spring. The BOA is the ninth race with an 8:40 p.m. post time.
The richest stake on the card is the $67,335 MQHRA Stallion Auction Futurity at 350 yards, run as the seventh race. Trainer Vic Hanson qualified four of the five 2-year-olds he ran in the June 16 trials including the fastest of the 10 qualifiers Jess One Lane who is the 5 to 2 morning line favorite Tuesday.
Hanson won this futurity once since its origin in 1986 as the Minnesota Stallion Breeders’ Futurity. He could not recall when however. “It’s been so many years,” he said. The win came in 1997 with Luckys Tiny Bit. The purse was $10,000. He has competed in the trials and the finals since then but a victory has been elusive. Tuesday could change that for Hanson, who is fifth in all time quarter horse wins, 97, and earnings, $1,024,928, in the suburban Minneapolis racetrack’s history.
“We got almost all of them in,” he said. “Now you just freshen up and go.” He likes his chances in the 33rd running and expects more from Easter Eve Bug, the slowest of those qualified, who had a bad break but closed to finish second in her trial.  “She’s been consistent. She didn’t break very well but she ran by enough horses to qualify.”
The four other stakes are the $34,315 Canterbury Park Distaff Challenge; the $49,575 Gopher State Futurity for which Olmstead qualified five of the 10 in the race; the $45,975 Gopher State Derby; and the $26,648 Canterbury Park Distance Challenge.
Posted in All News, Racing News