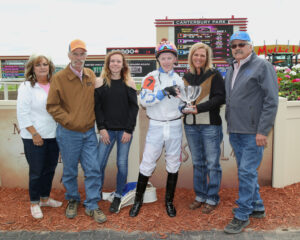 In a bit of an upset to start the 2018 Canterbury Park Quarter Horse Stakes season, Bhr Flashing Effort and Chase Clark powered home to win by a head in the $30,305 Minnesota Stallion Breeders’ Futurity.

Bhr Flashing Effort ($18.20) drew next to heavy favorite and second place finisher Haute Wagon. The pair dueled down the middle of the track right up to the wire in the 350-yard event. Final time for the 31st running of the Minnesota Stallion Breeders’ Futurity was 18.466.

Bhr Flashing Effort is trained by Bob Johnson for owners Broken Heart Ranch, who also bred the gray 2-year-old colt in South Dakota. He is by Cs Flashlight and is out of the Shake It Special mare Bhr Missy Special.

This was Bhr Flashing Effort’s second lifetime start; he debuted in Fort Pierre and ran fourth in the South Dakota Bred Futurity. 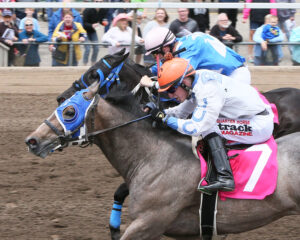 Haute Wagon and Marcus Swiontek were the bettors’ choice heading into the race after a lights out maiden breaking win at Canterbury in May. Prior to that effort, the Wagons West gelding had debuted at Remington Park. Haute Wagon is trained by Vic Hanson for owner and breeder Shelly Berkner. Berkner bred Haute Wagon in Minnesota out of the TimetoGet Tuff mare Chics Timeto Fling.

Third place finisher Just Plain Fast came out of the same Fort Pierre stakes race as Bhr Flashing Effort, but with a sixth place finish. The Hasta Be Fast gelding was ridden by Doug Frink in his Canterbury debut and is also trained by Bob Johnson.

Barbara Jane Tinant owns Just Plain Fast, who was bred by John Johnson in South Dakota, out of the No Brakes Now mare Pass Don’t Brake.

Posted in All News
Powered By Ultimate Auction